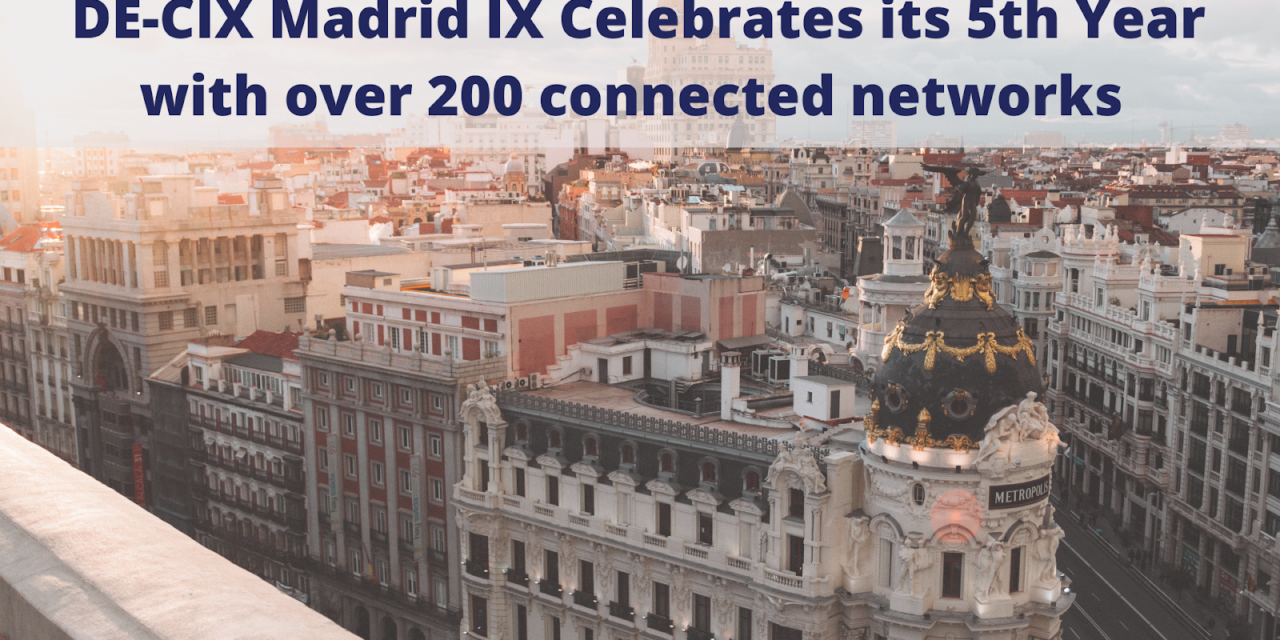 DE-CIX, the world’s largest carrier and data center-neutral Internet Exchange, and DE-CIX Madrid celebrate its fifth year anniversary, continuing the company’s theme ‘Without You.”  With over 200 connected networks and traffic exceeding 300 Gbps in Madrid, the success of the platform and interconnection capabilities would not be possible without the networks that participate. Furthermore, the strength and growth of the platform has now positioned DE-CIX Madrid as the technological hub of Southern Europe.

DE-CIX Madrid was launched in 2016 with only 66 connected networks and a single presence in two data centers. Today, DE-CIX Madrid is accessible from four data centers, providing connectivity to over 220 networks, a 233% growth in just five years. Traffic data figures are also impressive, growing by 50% since March of 2020, with current peak traffic exceeding 650 Gbps per second.

In 2020 DE-CIX celebrated its 25th anniversary – “from Frankfurt to Madrid, Dubai, over New York to Kuala Lumpur. Since 1995, the development of DE-CIX has been a global success story that originates in Frankfurt, the heart of the Internet in Germany.  Beginning with a switch, in an old post office in Frankfurt – 25 years ago, the interconnection of three ISPs: MAZ (Hamburg), EUnet (Dortmund), and XLink (Karlsruhe) was the foundation of DE-CIX.” To commemorate the momentous occasion, DE-CIX compiled a video, featuring its partners, and customers throughout the world. The educational and fun video can be viewed here.

Additionally, 2020 marked the 10th anniversary of the company’s successful partnership with IX Reach, which was the first reseller of DE-CIX and now has more than 950 networks peering on its globally interconnected network of IXs.

To learn more about DE-CIX, its services, capabilities, and to get a history of the evolution of the Internet through the eyes of the largest carrier and data center neutral Internet Exchange in the world, visit: the DE-CIX Virtual Anniversary Show of the company’s website here: de-cix.net.