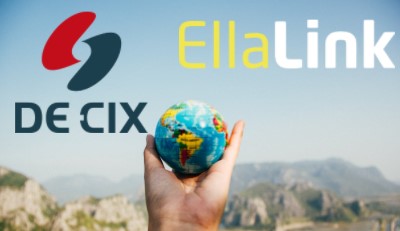 Ivo Ivanov, the CEO of DE-CIX International shares, “Latency is the New Currency of a Digital world,”  everywhere and everything will be transformed for everyone. With critical applications leveraging the internet, every moment counts e.g. mobility, finance, or e-health. Due to the burgeoning digital business demands in Southern Europe and South America, EllaLink’s new subsea cable will stimulate even more growth by enabling low latency and high quality data exchange between the two continents, which require connections to be as short and fast as possible.

EllaLink’s main objective was to create a unique ecosystem based on low latency connectivity between  Latin America and Southern Europe, uniting the markets and enabling better business powered by the most secure and highly reliable digital infrastructure. Diego Matas, Chief Operations Officer of EllaLink, said that the partnership with DE-CIX will provide “more efficient, and more secure access to Internet Exchange points in Europe and LATAM allowing [the company] to offer a stable and secure environment for customers.”

Enabling global connectivity and building relationships with companies that share similar values is core to DE-CIX’s mission.  In North America, DE-CIX announced its IX platform deployment in QTS Data Centers in four markets: Chicago, Dallas, New York, and Richmond; In Southeast Asia, DE-CIX established a new IX interconnection hub with UNN; In India, DE-CIX announced access to Oracle Cloud via FastConnect after establishing two new PoPs each in Noida, Delhi and Mumbai, India.  The company studies global interconnection trends and demands, recently releasing a white paper on the interconnection potential of the ASEAN region, and took part in a feasibility study for the Rhenish Mining District in Germany, exploring its viability as a digital interconnection hub region.  The company’s position as a leading global interconnection ecosystem continues to build strength throughout the world, and EllaLink’s partnership is yet another example of the company’s commitment to enabling connectivity, everywhere.

Celebrating its fifth year in Southeast Europe, DE-CIX continues to expand within the region offering access to additional IXs in Barcelona, Lisbon, Marseille, and Palermo. As these regions increase in data traffic, “DE-CIX Barcelona, and DE-CIX Marseille act as an ideal gateway to enter Europe from the Americas, Africa, and Asia.”  Follow on Twitter: @DECIX  and @EllaLink_Cable

For more information about the partnership please click here.