Where in the World is my Data?

– Dave Ruede, VP Marketing at Temperature@lert, says:
Siting a Data Center: Dilemma or Opportunity
Recently, much has been written and discussed in both professional social media sites and IT journals about locating a data center, particularly as it relates to the issue of energy and cooling.  The discussion has raised several options including siting facilities in countries where cooler temperatures are normal and geothermal and other environmentally friendly forms of energy are more common.  That being said, it takes a long, large, robust data hose to make such sites viable.  Other interesting options are also coming to the fore.  This piece discusses Nordic and other options for businesses to consider.
Go North, Young Man….
A 2012 Bloomberg Businessweek article titled Iceland, Data Center Hub? describes Iceland, with a population of 320,000, as “waiting to host the world’s information.” (Link to BW article) A former NATO air base is the site of Verne Global, a $700 million data center where, “You have 100 percent renewable energy. We can do 100 percent free cooling.”  The piece also notes, “Iceland faces competition from its Nordic neighbors. In southern Finland, near Helsinki, Google has converted a former paper mill into a data center; Facebook’s first site outside the U.S. will be built close to the Arctic Circle in northern Sweden.” 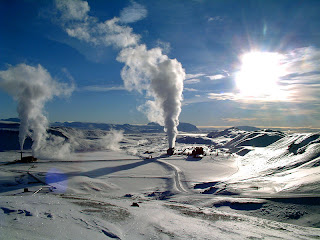 Krafla geothermal power plant in Iceland (Source: Link to Wikimedia.org)
In Iceland, The 100 percent free cooling is from the country’s abundant geothermal sources coupled with low ambient temperatures.  Most Nordic countries have abundant hydroelectric power, a source not without its own environmental concerns.  Still, the economics are compelling for energy efficient operation.
Why Not in My Back Yard?
For some, Nordic and Arctic regions may be too remote to consider. How about next door?  Siting data centers in large population centers can make a lot of sense.  High speed communication is easier because data transmission infrastructure is in place and many users are local.  Knowledgeable and experienced staff can be abundantly available.  But what can be done about data center power and cooling demands in modern urban environments where electrical grids are often strained and getting rid of heat not always easy?
Creative data centers are taking two paths, sometimes in combination. One is to use heat produced for internal cost reduction.  Intel published a 2007 Brief titled Data Center Heat Recovery Helps Intel Create Green Facility. (Link to Intel Brief)  In this piece a new data center was able to provide a 1.7 month ROI by installing special heat recovery equipment instead of conventional boilers for the facilities hot water and heating needs.  NREL’s new HPC Data Center in Golden Colorado uses such an idea.  Opened in early 2013, the facility uses heat capture and reuse to save a projected $200,000 in annual operating expenses, which combined with other energy savings, can bring the site’s total energy savings to $1,000,000 per year. 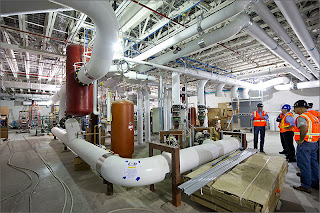 NREL HPC Data Center waste heat recovery system (Source: Link to NREL)
A second path is to use the exhaust heat for local businesses and residences. Like many older complexes, my university had a central boiler plant with steam pipes to the campus buildings.  Data centers may be the new “central heating system” for surrounding buildings.
Website ecoBuilderToday described Canadian telecommunications company Telus’ latest project, a $750-million residential and commercial complex in downtown Vancouver, BC. (Link to ecoBuilderToday Website)  The Telus Garden development will use waste heat from its own data center to heat and cool the 24-story office tower and a 53-story residential tower with more than 425 homes plus retail space.  Waste heat will also supply domestic hot water for both towers.  While power from the grid is needed, capture and reuse of the waste data center heat is expected to reduce the development’s energy demand from conventional sources by up to 80 percent.  Many eyes will be watching this project to determine if the economic projections live up to expectations, but there is reason to believe that this design concept will be useful for many large urban infill projects. 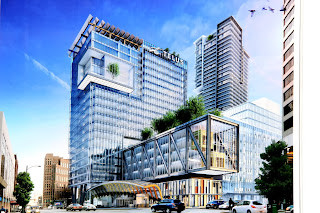 Telus Garden data center, retail and residential complex design concept
Too Many Choices, Too Little Time
Which location is best for a particular data center?  Businesses will need to assess their strategy and priorities.  Considering the Verne Global Iceland based location, Bloomberg Businessweek authors cite an industry competitor who notes, “Iceland may be too remote to become a true data hub. The location would be useful for backup data rather than live traffic that’s needed on a trading floor.”  Certainly the infrastructure for seamless, reliable high speed communication is paramount. Still, the arguments and economics may be compelling for those who can afford to build and enlist high quality staff in such remote locations.
For the urban infill projects, large commercial and industrial cities will have future challenges for electrical grid capacity and reliability.  The 2012 hurricane Sandy certainly showed even data centers that planned for such outages were at risk of flooding in their below grade generator rooms. So assessing the businesses service reliability guarantees will be an integral part of the siting decision.
As I write this article I am in a friend’s beautiful wooded New England pond side cabin in early April, and winter’s grip is still evident.  Despite this, crocuses are beginning to emerge through the leaves, beavers are actively taking down trees for new projects, and giant blue herons and Bufflehead ducks forage for food.  It’s nice to have the time to relax and catch up on reading and writing, but my ADD is whispering to me that it’s time to get closer to civilization.  Iceland or Vancouver, two interesting choices, ones businesses may want to consider in their search for cost-effective data center options for their current and future customers.
Author: Dave Ruede is VP Marketing at Boston based Temperature@lert (www.temperaturealert.com), a leading developer and provider of low-cost, high-performance temperature monitoring products.  Professional interests include environmental and energy issues as they relate to data centers, clean rooms, and electronics.  Contact: dave@temperaturealert.com