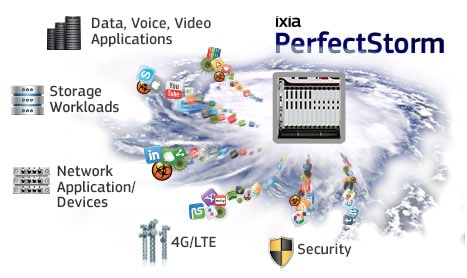 To keep pace with the explosion of bandwidth and service demands from mobile, cloud, social, and mission-critical business operations, data center operators are rapidly-adopting new technologies across their increasingly-complex infrastructures. Today’s mission-critical applications are taxing the integration of computing, networking, and archive storage, and exposing security vulnerabilities.

That is why enterprises, service providers, data center operators, and network equipment manufacturers need to validate data center infrastructure to ensure it will perform and remain secure under peak loads that just continue to get larger. Not validating how today’s planned build-outs will scale to tomorrow’s needs introduces unacceptable levels of risk – the price of being wrong, even once, is steep.

With Ixia’s new PerfectStorm platform, organizations will be able to ensure reliability and scalability of modern data center architectures and devices – including complex data, video, voice, storage, and network application workloads. PerfectStorm modularly-scales to nearly a terabit of traffic, consisting of both application traffic and malicious attacks, in a single, integrated system. Simulating millions of real-world end-user environments to test and validate infrastructure, PerfectStorm within a single 11U chassis provides the performance that requires over 25 feet of rack space from the competition, reducing data center costs for space, cooling and electricity.

Scaling up to 720 million concurrent TCP sessions at 24 million sessions per second, no matter the size of the network, PerfectStorm’s simple implementation and user interface offers a single platform to validate IT resiliency with true application behavior and custom test conditions. For example, PerfectStorm can be used for various applications, including the following: