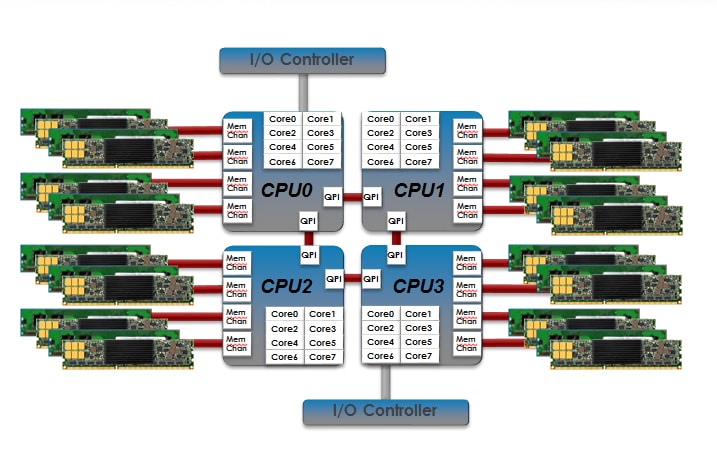 Enterprise storage has historically been hampered by technical and architectural factors that severely limit application performance. The I/O limitations of hard disk-based arrays, and the latency imposed by PCI-Express based SSD’s and architectures such as SAN andNAS that create bottlenecks for applications where speed and determinism are paramount.

The emergence of solid state flash continues to disrupt the storage market with the recent introduction of Memory Channel Storage™ (MCS™), an award-winning platform that delivers tens of terabytes of flash capacity in a single server with near-DRAM speed.  MCS technology puts NAND flash into a DIMM form factor and enables it to interface with the CPU via the integrated memory controller.  The result is a new class of high-performance, in-memory storage that eliminates the OS/IO/network overhead inherent to legacy storage arrays.

1. Faster Data Persistence – Memory Channel Storage provides significantly lower write latency than any other flash storage technology.  Creating and updating persistent data is now faster than ever before with as low as 5 microsecond write latency.

2.  Zero-Compromise Performance – MCS eliminates the trade-off between IOPS and latency that is inherent to other flash storage solutions. Applications can now support heavy I/O while maintaining fast response times, ensuring IT managers no longer need worry about tuning for just one of these performance attributes.

4. Efficient Scalability – The MCS architecture enables the flash storage solution to tightly fit the customer requirements.  MCS I/O performance is linearly scalable and total capacity can be “right-sized” to match application needs.  Current products based on Memory Channel Storage are available as 200 GB or 400 GB modules.  Multiple modules can be integrated into servers or storage arrays as needed, based on the capacity and performance requirements of specific applications.

5. Platform Flexibility – Most data centers employ a variety of storage solutions depending on the challenges faced.  Via its combined advantages (i.e. ultra-fast persistence, supports heavy I/O without compromising response time, determinism, scalability), MCS provides a uniquely flexible platform that can address a wide variety of workloads.

6. Strong Mixed-Workload Performance – Due to its distributed architecture, MCS provides strong mixed-workload performance.  Not only can MCS-based modules be written to or read from in parallel, applications have the ability to write to some individual modules while reading from other modules.  Mixed workload applications, such as databases and virtualized environments, benefit greatly and are ideally suited for MCS-based solutions.

7.  Flexible Form Factor – By placing persistent memory on a standard DIMM module, MCS-based products will fit into any server or storage design that utilizes the standard DIMM form factor.  Flash memory can easily be integrated into standard server and storage arrays with no modifications to the motherboards or chassis and without the complexity of blade servers requiring custom PCIe mezzanine cards. This makes MCS the most flexible means of deploying persistent memory for enterprise and storage applications.

8. Ecosystem Support – With support for the most critical operating systems and hypervisors, MCS can be deployed quickly and easily into virtually any enterprise environment necessary.  Driver availability for Microsoft Windows™, VMware ESXi™ and the most prevalent Linux distributions and kernels means broad applicability to enterprise applications.

9. Memory Expansion – MCS redefines the idea of memory expansion by placing flash on the same memory channels as system DRAM.  Paging occurs at near DRAM speeds as these operations are simply transfers of data from flash to DRAM within the same memory controller.  No transfers through a storage stack or movements external to the processor are required, thereby enabling extremely fast paging.

10. Reduced TCO – With MCS, each node in a cluster is able to complete more work in less time.  With storage attached directly to the processors rather than across I/O expansion connections and storage stacks, data is accessed, manipulated, and rewritten to the flash in significantly reduced time.  Fewer nodes also means less external storage arrays filled with large numbers of hot, spinning media, , and lower power and cooling costs that lead to a significantly reduced Total Cost of Ownership.

11. Future-Proof Platform – The MCS architecture is designed with the ability to utilize current NAND-flash as well as future non-volatile memories, ensuring MCS customers will benefit from the capacity and performance enhancements of technologies such as 3D flash, phase-change memory, magnetoresistive RAM, and resistive RAM.

Riccardo Badalone is one of the Co-Founders of Diablo and has served as a director since the company’s inception in 2003. Mr. Badalone has served as Chief Executive Officer since 2007 and previously served as Chief Technology Officer of the company. In his previous role at Nortel Networks, Riccardo was pivotal in delivering one of the world’s most advanced Serializer/Deserializer (SerDes) technologies for switching and framer applications. He was involved in backplane protocol engineering and developed phase align algorithms for backplane and optical link SerDes macros. Riccardo was also manager of the OEM Hardware design group at Matrox Graphics Inc., where he and his team designed and supported multiple generations of desktop motherboard platforms for all the major PC OEMs including HP, Dell, Compaq, Siemens, and Fujitsu. Riccardo holds a Bachelor Degree in Electrical Engineering from Concordia University, where he specialized in Microwave and Optical Theory.