Static Control Flooring in the Data Center: Knock Out The Charge

Carpet also prevents static generation, but it is rarely used around servers and storage equipment due to air contamination from loose fibers and its tendency to trap dirt and other contamination. One further detractor is the difficulty rolling systems and castor chairs over carpet. 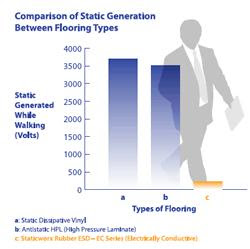