Shaving down to nanoseconds with a blade 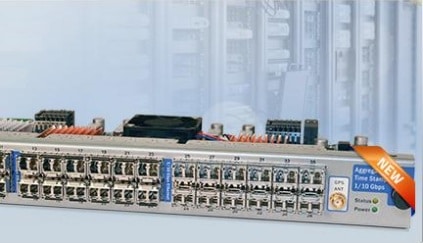 Latency – the word that never fails to come up in any conversation about data centers. Proving low network latency is on the top of data center managers’ minds to entice companies to co-locate and ensure that data passing through that center can be analyzed, as much as possible, in real time. Once in, those companies’ IT managers must ensure that stipulated network latency measurements in SLAs with their customers are met. This creates an urgent need for a tool – such as APCON’s new INTELLAFLEX 36 port 1/G/10G Time Stamping & Packet Slicing blade) –promising accurate time stamping of data packets that show precisely when a packet passes through a network.

An example of an industry that needs time stamping is the high-frequency trading business. In any financial market, knowing the exact time a stock or commodity is sold determines how much is made or lost on that deal. This is compounded many times over given the volume of trade that can take place in just one second with high-frequency M2M trading.  Financial firms’ trading applications cannot be optimized without knowing what degree of latency, down to the nanosecond, exists in their networks. Meeting and exceeding latency requirements of customer SLAs can give financial institutions clear competitive advantages, and also cover losses should disruptions in computerized trading occur. If, for example, a network is compromised and unintended volumes of trades occur before the breach is detected, the “bad” trades can be nullified because they will have been time stamped during the period that the cyber attack occurred.

While the to-the-nanosecond precision requirements of the finance industry may not be necessary in other verticals, this does not absolve companies such as telecom service providers, manufacturers and the military from the act of time stamping. Any company that has specific networking requirements has a lot happening in short periods of time needs to know precisely when data has entered or exited its network to optimize processes.

Clearer visibility into network latencies through ever more precise time stamping is useful for data center and IT managers to know, but equally important for them is figuring out how to maximize data flow and boost security. This can be accomplished with packet slicing. Through the new INTELLAFLEX blade, users have the ability to specify the packet slice length for ingress or egress ports. Reduction of packet size ensures seamless data flow and increased security with the ability to remove private financial information that complies with security standards and audits.

From a data center architectural perspective, incorporating the INTELLAFLEX Time Stamping blade stands to save organizations money over time because it is singlehandedly capable of not only time stamping at sub-10-nanosecond precision based on GPS, NTP, PTP and IRIG-B protocols, but also packet slicing, data aggregation, load balancing and filtering. It also has two to three times as many ports as other blades. Consider it the Swiss Army knife of blades. Space in a rack is money and as the need for time stamping becomes more prevalent across industries, having this blade in your network puts you in good shape to meet future needs with a standardized solution to intelligent network monitoring.