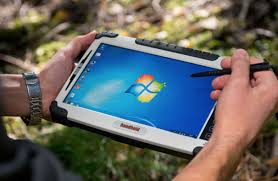 Even professional users of rugged laptops, tablets and smartphones, are sometimes unsure of what defines a “rugged computer” and how the various tests to validate ruggedness are carried out. A truly rugged computer is so much more than just a normal computer wrapped in a tough outer case, as Handheld’s CEO Jerker Hellström explains in this article.

First of all, let us distinguish between a “rugged” computer and a “ruggedized” computer (or tablet or smartphone). A rugged computer is designed to operate reliably in very harsh environments and conditions. The term “ruggedized” gives the sense that fragile internal components have been somehow protected. Truly rugged devices are not simply wrapped in a tough shell.

Tough and durable mobile computers and smartphones are gaining in popularity – because the customers demand more durable products! – and there are actually some mainstream devices that could be described as  ruggedized (and are often advertised as rugged). But they are not truly rugged. They might be waterproof but lack other aspects of ruggedness, like the ability to withstand vibrations/shocks and function well in extreme temperatures.

Let us briefly recap the definition of ruggedness:

·        The devices should have passed some of the MIL-STD tests, i. e. the American military standard for equipment. 24 laboratory test methods ensure that the equipment can handle low pressure at high altitudes; exposure to high and low temperatures plus temperature shocks; rain; humidity; sand and dust exposure; leakage; shock and vibration.

Now let us take a closer look on the tests carried out on rugged computers:

All rugged mobile computers are tested to ensure they can survive falls as well as high-force impacts to the devices’ casings. Drop tests are certified by independent test laboratories and performed in accordance with MIL-STD-810G. There are eight different procedures to choose from that each use different ways to cause shock or impact. The “transit drop test” is the most cited. It requires items to survive a total of 26 drops from the height of 122 cm, on each face, edge and corner, onto a hard surface like concrete.

Liquid resistance testing. Mobile field computers are inevitably exposed to rain, spills and splashes. The second number of the IP code describes the liquid ingress protection, i.e. how well the unit is protected against water. The scale ranges from dripping water to continuous immersion in water. Water resistance tests are often carried out by the manufacturers of rugged computers by exposing the computer to powerful water jets from many directions without harmful effects. The test duration, water volume and water pressure varies depending on the rating. The water temperature is lower than the device.

Vibration tests are performed in accordance with MIL-STD-810G. They are designed to determine if a device can withstand the vibrations it would be exposed to during its lifecycle. The tests use laboratory shakers set to different levels to simulate being on a vehicle or carried by a person, with variations in the vibrations’ wave form, frequency and intensity depending on the type of device and the environment being simulated.

Sand and dust testing. A rugged computer must be able to keep out particles. Almost all field workers are exposed to dust and dirt at some point that would slow key functions and damage components if not protected.

The dust resistance procedure tests ingress of small dust particles. Flour and sand is projected onto the device at high wind speeds and high temperatures for several hours, rotating the device and varying the temperature and wind speed.

The blowing sand resistance procedure is basically the same as the dust test but the test is done in higher wind speed. The high end test simulates being near an aircraft.

When testing for operability during low temperatures, again three procedures are carried out to determine how the device will behave in low temperatures. They are much the same as in the high temperatures tests, except being done in freezing conditions.

Humidity testing. In addition to liquid resistance testing for IP rating, many manufacturers of rugged mobile computers test their devices in highly humid conditions as a separate test that is defined by the MIL-STD-810G standard. The computers are exposed to humidity well over 90 per cent for several days in tropical heat. Many of the same features that make mobile computers liquid resistant also help prevent damage from high humidity.

These are the most important tests. The next question is: how do manufacturers of rugged mobile computers actually make their devices touch enough to pass these tests?

§  There are stiffeners inside a rugged computer, often made out of aluminium, to prevent inside components and boards from flexing during an impact. The outer shell (case) and bumpers are designed to absorb the energy from a drop to prevent internal damage.

§  The touchscreen of a normal smartphone or computer is basically glass (with some coating to make them sensitive to touch), whereas the displays of rugged computers use chemically strengthened glass to prevent against scratches and cracks. The displays can also be positioned lower than then surrounding case to decrease their vulnerability.

§  Display backlight is used to improve outdoor readability, even in direct sunlight.

§  Some rugged computers are fitted with internal heaters in order to operate successfully in very cold environments. The heater warms components to an acceptable operating level and eliminates condensation arising from temperature swings.

In short, every simple detail and small part is researched, developed and chosen to make the computer as rugged as possible.

So where does all this leave us? Well, it is important to know the ingress protection scale – the higher the numbers, the tougher the device, basically. It is also instrumental to check that the unit has undergone MIL-STD tests – many devices boast good IP numbers but fail to inform customers that they have not gone through any MIL-STD tests (which basically makes them normal fragile computers that are somewhat dust and water resistant).

With a deeper understanding of the standards and the tests, it will be easier to choose the mobile rugged device that suits your unique needs. And if you want a rugged computer – then do not buy a ruggedized computer. Rugged computers are built—inside and out—to be rugged. No fragile parts wrapped in a hard shell here.

Jerker Hellström is a pioneer and industry veteran in the mobile rugged computer industry. In both entrepreneurial and managerial positions, he has 25 years of experience from developing, designing, manufacturing and marketing rugged computers globally. See www.handheldgroup.com.