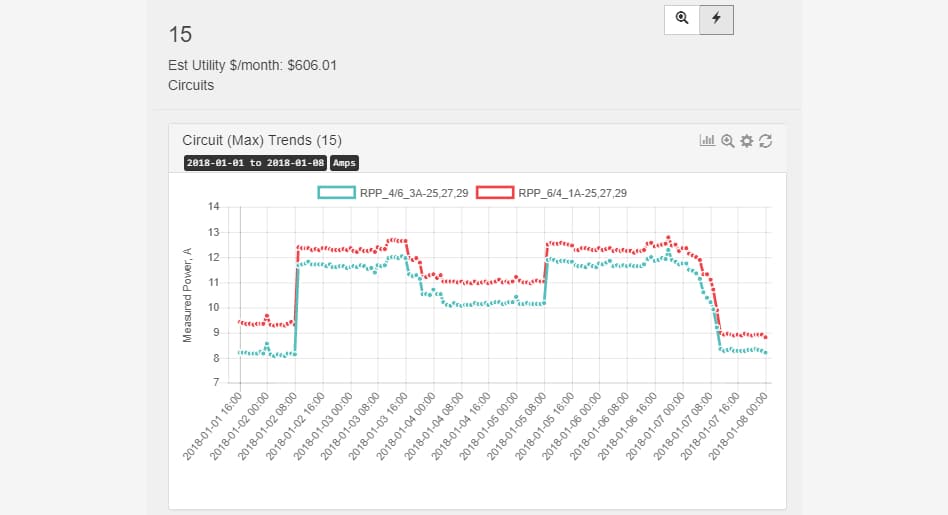 According to the Ponemon Institute’s latest “Cost of Data Center Outages” study, the average cost of an unplanned data center outage has steadily increased from approximately $500,000 in 2010 to nearly $750,000 in 2016, a 38 percent increase. What’s also intriguing about the report is that data center outages aren’t just costly, they’re extremely common. Total outages occurred once a year on average and device-level outages occurred every two months among the U.S.-based data centers surveyed.

As we let these figures sink in, and before answering what’s wrong with the Rack Power Circuit Monitoring Chart presented above, let me provide some background about this graphic:

First, an Observation from this Picture

Although the servers in this rack are equally plugged into both circuits they are not drawing power equally from both circuits.

What Is Wrong with This Picture?

A 30amp 208v circuit breaker by US code de-rated to 80% can safely supply 24amps. However, the combined load on the two circuits at peak is approaching 25amps. Though neither circuit is oversubscribed in normal operating conditions, if one circuit fails its load will cascade to the other circuit, which will then become oversubscribed and be at risk of create a cascading failure.

What Are the Takeaways from This Illustration?

Intelligent power monitoring software is needed at each rack to aggregate A and B power sources and give alerts only when actual oversubscription occurs.

To return to the alarming statistics presented in the Ponemon survey, the study also found that average data center downtime was 90 minutes, resulting in an average cost per incident of more than $1 million in data centers that comprise the core of an organization’s business operations. With economic stakes this high, to say nothing of the loss of a company’s business reputation, if you’re not monitoring your racks with intelligent power monitoring software, then one of two things about your data center is true and neither is good.