It’s Not All Fun and Games: Esports Data Storage and Management Challenges 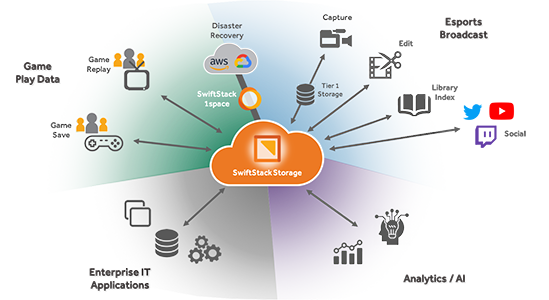 The competition is intense, the spectators are amped, and the games are watched by millions worldwide – it’s not the World Cup, it’s not the Olympics, it’s professional-class video gaming.

In the fast-growing esports industry, popular games like Overwatch, Hearthstone, Madden NFL, Fortnite, League of Legends, and Call of Duty are played by elite gamers. Like physical sports, formal leagues and teams have been established, arena tickets and broadcast rights bring in huge money, athletes compete for millions of dollars in prize money, and endorsement deals set records.

Behind the games are systems to create and deliver content that would strain even the largest data centers. These unique IT requirements and challenges include massive data loads, collaboration across multiple geographic regions, unified on-/off-premise workflows, and real-time streaming capabilities.

Fortunately, game developers and publishers driving esports are extremely comfortable with innovation and comfortable adopting new technologies, new tools, and new workflows. Esports IT teams have become trailblazers, and they’re building state-of-the-art infrastructures to accommodate their scale, performance, and access needs. (That said, there is still a firm requirement for sustainable economics, especially since the demands for performance and data loads are growing.)

The first challenge is how data is generated. While broadcast digital video is captured live from a camera, esports digital video is primarily captured from player PCs or mobile devices. This data is generated simultaneously by dozens or hundreds of players. Most events also feature in-game announcers and traditional cameras generating data, and even audience members, for multiple simultaneous recording streams and events that are several hours long.

Next is the scale. A leading esports company currently manages a data load of 10 petabytes, growing every day. The volumes will no doubt reach multiple exabytes before long.

Then there are multiple requirements for platform compatibility including streaming through Twitch, YouTube, and conventional cable TV, serving every possible device, so millions of esports fans worldwide can cheer on their favorite competitors in real-time.

That, in particular, demands high performance to deliver the live sports experience. Data from a remote arena needs to be available immediately, accessible from anywhere by anyone watching on any device or platform, and resiliency to withstand failures.

Like many media/broadcast projects, esports also requires collaboration and communication between internal and external workers, across multiple regions and even continents, from local infrastructure to remote clouds, and appropriate levels of security and reliability. Content needs to move from a remote location such as an arena to “home base” quickly and easily.

Traditional networked storage platforms are not suited to these extreme conditions. They can’t offer enough performance and throughput. They can’t support multiple sites, regions, and clouds. They are costly and difficult to scale and maintain. They offer insufficient integration with standard media industry tools like content delivery networks and media asset management.

Esports IT projects being built today, like many other entertainment projects, are being deployed on public cloud compute, storage, and services like Amazon, Google, and Microsoft. A cloud-based, cloud-enabled infrastructure for esports can consume processing muscle and capacity as needed, when needed. Cloud providers deliver abundant scale and elasticity at a more affordable cost. What they don’t deliver in abundance is data or workflow management features to facilitate data moving throughout the environment, from remote to local to cloud to another cloud, based on ingest and processing demands, or to organize and tag files.

As their production processes iterate, esports software and systems installed need to iterate too, especially as the demands scale. Like elsewhere in the broadcast and entertainment industry, esports media files are large. High-definition video and multi-cam formats are the norm, so they need the “bottomless” storage of the cloud for today’s task as well as a long-term library of media assets so footage of last year’s record high score can be located ASAP.

Esports workflows also need to span multiple clouds. While consuming storage and compute resources as needed offers better economics, the providers are highly competitive. Their pricing changes and features differ, so IT teams need the ability to adapt as well as maintain data in more than one region to ensure durability, availability, and support production workflows around the world in a secure and efficient way. An esports customer of ours currently has at least seven facilities around the globe in the U.S., Europe, and Asia. Another has five sites: two in Asia, two in Southern California, and one in Las Vegas. These geographically distributed (but united) workforces need geographically distributed (but unified) systems so they can collaborate in real-time, and so files are available wherever needed by users and applications. Gaming companies find that other operations like new game development benefit from the flexibility of this multi-cloud infrastructure that secures production data in a private cloud and/or on-premise storage, while data remains accessible to and shared by remote workers.

Esports is an inherently creative, cutting-edge environment and IT professionals are creative and cutting-edge too. While other corporate environments are often reluctant to modernize their operations, esports is all about pushing boundaries of how data is distributed, stored, and consumed. As a vendor supporting esports, we are gaining from the expertise of our customers as much as they gain from ours.