Into a New, Digital School Year With Fiber Optics 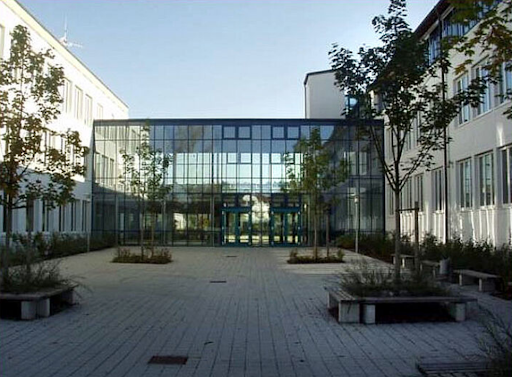 In the past, the Erdweg primary and middle school had only three limited stand-alone networks, which were principally used for administrative tasks and PC-based training activities for students. At the start of the year, Rosenberger OSI laid cables for a forward-looking data network. Meaning that there is now nothing to stop the use of digital technology in the classroom.

It is not just since the Covid pandemic that one thing has been clear: Schools in Germany have a lot of catching up to do in the area of digitalization. In 2019, the German government introduced the state-funded “DigitalPakt Schule” School digitalization program and made available €5 billion of funding for a contemporary IT infrastructure. As a result of the Covid pandemic, the program has been boosted by a further 1.5 billion.

The town of Erdweg in the Dachau district has taken advantage of this program in order to equip its primary and middle school with an innovative data network. The aim was to install WLAN access points in all the rooms and classrooms and provide LAN connections for PCs and notebooks. To achieve this, the school needed a new network infrastructure that was adapted to local conditions.

To be able to apply for a grant in the first place, it was first necessary to draw up an analysis of the current situation of the existing network. During the summer holidays of 2020, Rosenberger OSI, an expert in the field of fiber optic-based connection technology, worked with the school’s in-house electrician and an IT service provider to examine the existing infrastructure and draw up the inventory required for the grant application and, at the same time, to perform feasibility planning which could serve as the basis for the preliminary cost estimate. Following a restricted public Request For Proposals, the contract was signed at the end of 2020 and implementation of the measures was able to start in January 2021.

Previously, the school building had only been partially cabled. One network with separate Internet access covered the administrative block with the headmaster’s office, deputy headmaster’s office and secretarial office, as well as the staffroom. An internal IT training room equipped with PCs was covered by a second network, which also had a separate Internet connection. A third network was intended to connect the chemistry and physics rooms. However, even though a copper LAN cable had been laid here, it had not been activated.

Redesign for low cable use

Rosenberger OSI played the leading role in planning the new cabling solution based on the PreCONNECT® smartNET cabling system. This concept offers a number of advantages. The bandwidth can be extended without difficulty and data rates can be assigned individually to different departments and processes. Thus, for example, it is possible to ensure that the IT training room always possesses sufficient bandwidth. Currently, 10 Gbit/s are used in the school’s backbone. 40 Gbit/s could be achieved without any difficulty.

At the same time, the infrastructure makes do with a minimum of cabling. This is achieved by using so-called office distributors (OD) to replace the commonly used floor distributors. They can be redundantly integrated in the network in a ring or radial configuration.

The school network in Erdweg was designed in such a way that existing and new satellites (office distributors) are redundantly connected from a central node in a radial configuration. In this way, it was possible to include the three existing stand-alone networks in the new design and integrate them in the overall concept without the need for large-scale structural measures.

In addition to the planning, Rosenberger OSI was also in part responsible for coordinating the measures with the two project partners. Cooperation proved to be very successful, the various parties involved were perfectly coordinated and the structural measures were completed earlier than actually scheduled.

Thanks to this concept, it was clear that comparatively few cables would have to be laid compared to conventional structured cabling. This reduced the extent of the structural measures and helped prevent the need for noisy, dust-intensive activities such as breaking through walls, core drilling and opening fire compartments, all of which is not simple during ongoing school operation with alternating attendance patterns. The in-house electrician took care of the preparation and implementation of the cable laying infrastructure.

However, one difficulty remained: The floor distributors had to be installed in such a way that, as far as possible, they were not located in publicly accessible areas. The building distributor was accommodated in a transitional area to a heating shaft which could not be accessed by the students. There is one sub-distributor each in the secretarial office, the library and the craft room, in all of which students are usually only present under supervision. Another distributor is located in the PC training room; however, this was already present and could continue to be used.

Compared to conventionally structured cabling, in the school project in Erdweg it was possible to save approximately one third of the otherwise habitual cable-laying infrastructure measures, approximately 50 percent of the fire compartments – which prevent cable fires from spreading in the cable shaft – and a good 40% of the cabling itself.

The WLAN access points are supplied with electricity by means of Power-over-Ethernet (PoE). The LAN cable is supplied via a PoE-capable10G switch in the sub-distributor. The IT system house was responsible for providing and installing this equipment. After Rosenberger OSI had finished installing all of the passive network cabling at the end of April, the system house performed the final installation work, which lasted until the end of July. This means that access to the new high-speed network will be fully available throughout the entire school for the coming school year, primarily via WLAN and the additional RJ45-LAN connections present in all the classrooms.

Everyone in the local community is happy that the students now have access to modern network equipment. “The digital transformation is no longer a topic for the remote future but has been gathering pace for many years. It is something that is relevant for many areas of society and, naturally, also for schools. This project, which has been successfully implemented by Rosenberger OSI, provides a reliable infrastructure for the development of a full-area network in the classrooms in the primary and middle school,” explains Christian Blatt, Mayor of Erdweg and 1st Chairman of the Erdweg School Association.

Thanks to the versatile structure of the PreCONNECT® smartNET, the digital infrastructure of the Erdweg primary and middle school can be extended at any time. The optical fiber cable currently carries 10 Gbit/s. However, the fiber-optic cable in the backbone can transport 40 Gbit/s if switched accordingly. To do this, it is not necessary to lay any new cables but instead simply to replace the 10G switches with 40G variants. If additional LAN connections are required at a later date, then it is sufficient to lay a copper cable for the LAN connection to the nearest office distributor.

And project lead Rosenberger OSI is also highly satisfied with the results. “We are delighted to have been able to support the DigitalPakt Schule school digitalization initiative and to take the first successful step in the company of the Erdweg primary and middle school. Thanks to our innovative smartNET system, future extensions of the network are also possible without difficulty,” explains Thomas Schmidt, Managing Director of Rosenberger OSI.