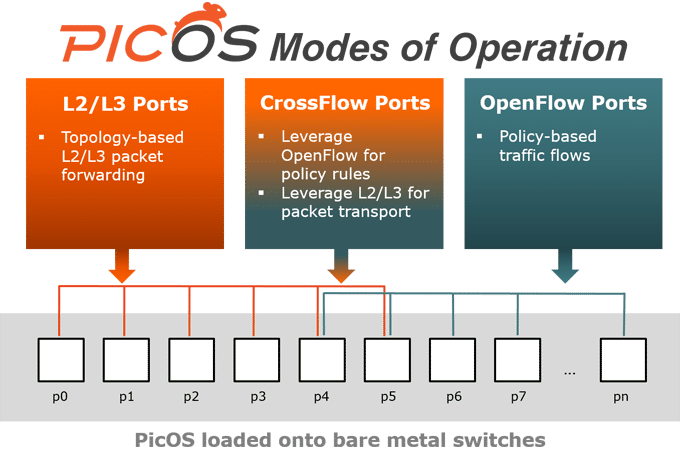 The emergence of SDN has created a divide in the networking world. People have been building Layer 2/Layer 3 networks for decades. These consist of switches and routers and leverage protocols and technologies that networking gurus are familiar with such as Ethernet, VLANs, trunking, BGP, OSPF and more. These protocols govern how traffic is forwarded and are built upon the 7-layer OSI model.  And because this model is relatively mature, there’s an inherent reliability and a clear understanding of how these networks are built, how they work, and how they are maintained.

SDN, and (in this example) OpenFlow, is a new capability that allows users to do some interesting things, such as deploying a centralized controller to create rules and policies that dictate where traffic needs to go.  In theory, this approach is more flexible and dynamic, and gives users the ability to drive business logic into the network.  If you want to trigger some traffic monitoring, network tapping, or bandwidth calendar based upon users, times, or geographies, you can do that with OpenFlow.

The problem today is that these worlds remain separate, and this creates added costs and complexity for users because of the necessity to build, operate, maintain, and troubleshoot separate networks.  CrossFlow Networking offers the flexibility to combine OpenFlow for policy-based networking with the efficiency of Layer 2/Layer 3 for traffic forwarding.

CrossFlow Networking is a unique capability delivered on PicOS 2.4. It allows these two networking worlds to “collide” (in a good way).  With CrossFlow, users can selectively integrate OpenFlow into certain parts of their network for specific applications, while maintaining the efficiency and performance of the tried and true Layer 2/Layer 3 protocols.

Here’s how it works.  OpenFlow allows users to stitch in a unique path for a specific application.  CrossFlow does this by allowing OpenFlow to fine tune or override the switching (FIB) or router (RIB) tables in the switch.  These tables are “wired” by how Layer 2 and Layer 3 protocols converge to a best path for the traffic.  In some cases, that path may not be ideal for the application (for example, you may want a specific application to access data or a network service that resides somewhere else in the network). One possible solution would be to adjust the switching and routing topology to get the desired behavior, but that takes time and is disruptive. CrossFlow Networking solves this by allowing an OpenFlow rule to trigger specific behavior, and then modifying the packet appropriately to use the existing FIB and RIB tables. This gives users granular control to allow a specific policy to change behavior, without disrupting the topology of the existing network.

Ultimately, CrossFlow Networking simplifies the process of integrating SDN into today’s networks.  It bridges the operational gap between traditional networking and SDN, while also reducing CapEx for customers.

Calvin Chai is the Head of Product Marketing for Pica8 Inc., the leader in open systems for software-defined networking.  He is currently responsible for the GTM strategy and execution for the Pica8 portfolio of open switching systems and software.

Prior to Pica8, Calvin has held numerous leadership roles in product, technical, solution, and corporate marketing.  Most recently, he led the cloud product marketing team at Juniper Networks where he was responsible for the marketing strategy focused on the cloud and data center markets.  Prior to Juniper, Calvin spent ten years at Cisco focused on various technology initiatives including integrated security, policy, and identity management solutions.

Calvin holds a BS degree in Computer Science and Engineering from the University of California at Berkeley.