From the disaster site to the command center 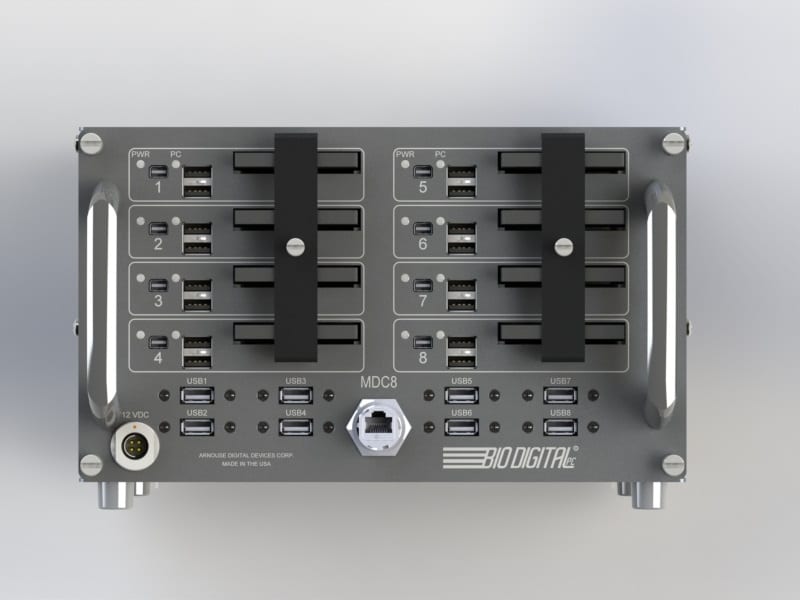 From disaster sites to military applications, the need has arisen for portable, miniaturized, highly-efficient, long-battery life portable servers to communicate with the command center over secure servers.

Arnouse Digital Devices Corporation – http://www.arnousedigitaldevices.com/ – based in Lake Success, NY, has introduced a super miniaturized, hardened, mobile communications center that can be scaled from one to 22 BioDigitalPC®/MobylPC® Cards, each the size of a credit card operating as servers.   Their Mobyl Cloud allows for hot plugging the BioDigitalPC®/MobylPC® Server cards for quick scaling.  Running on 120/240VAC or 12-36VDC, mobile server has up to 8 hours of scaled out server uptime and nearly a week of minimal server usage using 4 UBI 2590 lithium-ion batteries.  Weighing in at approximately 45 pounds, applications include any remote usage, including disaster sites.

Arnouse Digital Devices, Corp (ADDC) hold numerous patents on the miniaturized BioDigitalPC® 9, its 4th generation BioDigitalPC® x86 computing platform. The BioDigitalPC® 9 family of computers are a credit card sized computing platform equipped with the latest Intel CPU, up to 8GB of DDR3 and 128GB of ultra-fast SanDisk SSD. It is powered by 5VDC and consumes between 5W and 10W. It has output signals of four USB 2.0, one USB 3.0, two PCIe x1 Gen2 and DisplayPort++: servicing HDMI, DP, DVI and VGA video outputs. The BioDigitalPC® 9 also includes the Trusted Platform Module(TPM) for the highest computing security.

It is able to run any x86 operating system including Windows, Windows Server, Linux, CentOS, RHEL, Ubuntu, and many others. It is fully compatible with older BioDigitalPC® docking stations and is ready to provide a mobile computing experience with just a moment’s notice. The card is hot swappable and contains a built in graphics card.

Green – BioDigitalPC credit card size servers are 90% more energy efficient than a typical server.  They also produce much less waste when hardware is upgraded – no need to replace many of the elements as they do in most server systems. Buy a 22 server reader and when it’s time for replacement, instead of replacing the whole rack of metal – just pull the cards out and replace them with new cards – repurpose the old cards and use them as desktops.

A typical server install costs upwards of $15K. Since it’s above the 1 year amortization for the IRS it needs to be amortized over three or five years. The tax benefits are not as immediate. In the BioDigitalPC server card word world you can deduct the cost of the new card from your tax bill on year one since it’s under $1,000. This means on Year One a corporation can regain 35% of the total cost. If the Corporation then updates the next years they can sell the old server card as a desktop at 50% original value or give it away for a tax deduction for a similar value. This means that the corporation can refresh their technology offerings in one year at a cost of under $200 per server. Far less than what can be done today under traditional server refresh cycles. The savings can bleed down into the corporation as the reused server cards turn into desktops/laptops/tablets at no additional cost to the company. These savings don’t take into account the energy savings or the increased value of high security provided by the card.

All BioDigitalPC®s have a waterproof, dust-proof, fire resistant and rugged epoxy coating ringed with anodized aluminum able to resist the worst operating conditions. The operating temperature is between -40C and 110C and is able to withstand nearly 3000G forces (fully epoxied).

ADDC was founded in 2002 by Michael Arnouse, the CEO and President of the Corporation. Currently, offices are operated on both the East and West Coasts. ADDC owns fourteen patents in the areas of computer hardware and security devices. Additionally, Global Mobile Video is a wholly owned subsidiary of Arnouse Digital Devices Corp.

ADDC strives to be the undisputed global leader in the design and manufacturing of innovative highly reliable rugged and secure credit card sized computers and software. ADDC provides the world with optimal computing solutions for traditional and harsh environments that enable people, government and businesses to excel in productivity and abilities.