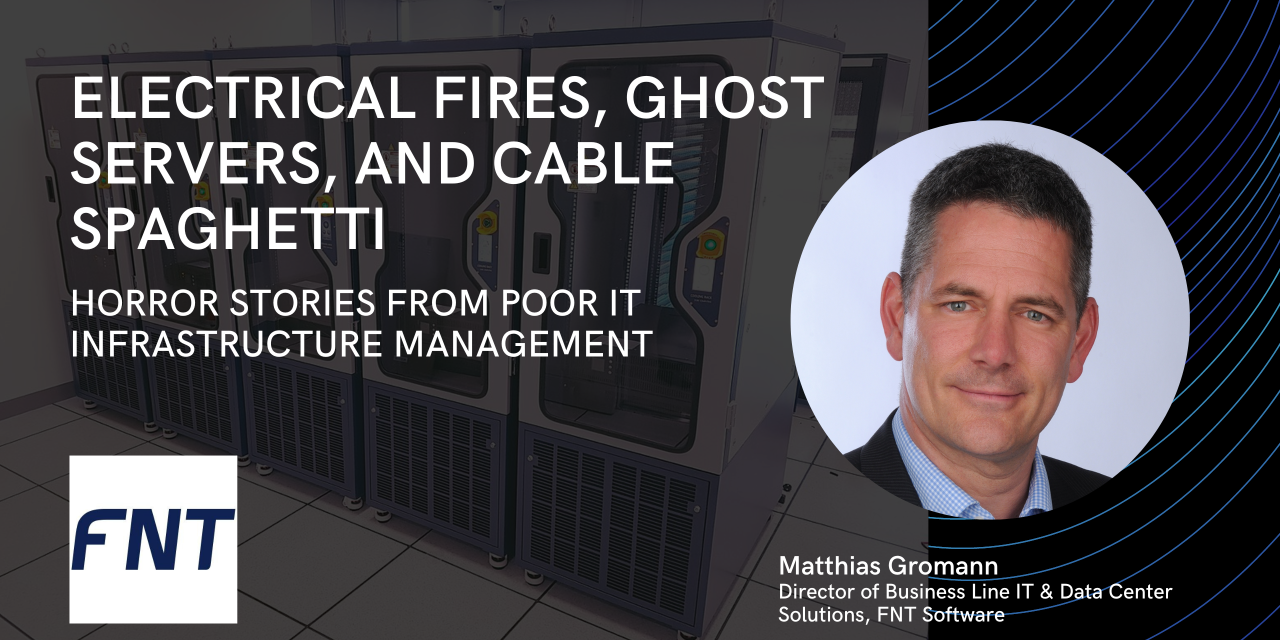 Without accurate, complete, and current documentation, problems are inevitable at some point. From data center fires to explosive electricity costs and outages, poor IT infrastructure management can quickly spiral into a crisis. The following examples are taken from real-life horror stories to highlight what could go wrong without a modern documentation tool in place.

When a data center management team noticed that an air conditioning system was using much more power than expected, they knew something was wrong. Since it’s easy to calculate the maximum total power drawn by servers and the associated heat involved, there shouldn’t be any surprises.

The data center management team knew they needed a thorough documentation tool for full visibility into their IT infrastructure. After the air conditioning system checked out fine, the only option was to take a full inventory of all the equipment, not just the servers and racks but all the cable connections, the power supply, and the power consumption of every device. Lo and behold, the power supply was massively overloaded. There was significantly more electricity (7 kW) flowing through the socket strips than they were designed to handle. Over time, more and more hardware had been plugged in and nobody had thought about how much the power outlets could support.

Normally, this would blow the fuses, but in this case the socket strips and cables heated up enough to push the air conditioning system to the brink. Similar to a light bulb, power cables can reach several hundred degrees, posing a fire risk. Unfortunately, the teams implemented the documentation tool too late. As a result, a cable fire in the transformer caused significant damage and cost thousands of dollars to fix. The fire could have been prevented if the teams had been utilizing a professional documentation tool all along to identify such critical developments at an early stage.

It’s important to keep in mind that even if unlimited power is available, cable capacities are not inexhaustible. Documenting power consumption, power networks, and utilization is vitally important in data centers to avoid the risk of fire, prolonged outages, and significant costs.

Money Down the Drain

Without a documentation tool in place, employees can walk past flashing servers and switches multiple times a day without knowing their functions or how much power they are consuming. There may be ghost servers that data center management teams may not even be aware of, which can lead to inefficiencies, security vulnerabilities, wasted energy, and unnecessary costs.

A major automotive manufacturer was once surprised to find a packed server rack with network cables coming out of it that were not connected to anything. The servers were running but not doing any work. In this case, there was no documentation whatsoever.

Shockingly, the skyrocketing energy costs for the idling ghost servers was over $5,000 a year for zero output. The rack was also adding to the load on the air conditioning system. More hardware had likely been installed elsewhere to make up for the missing computing power, adding even more costs.

In most data centers, cable ducts and passages are hidden in the floor or suspended from the ceiling. As a result, they get very little attention. Cable ducts are often out of sight, out of mind, that is until new cables need to be pulled and there’s no room. Confusion then sets in when trying to determine which cables are actually used.

Some technicians think they’ll save themselves the trouble of tracing cables by simply piggybacking them into ducts that carry water, gas, or heating pipes. This actually creates even more trouble and can lead to disastrous consequences. A break in a pipe, for example, can trigger an explosion, short circuit, or fire. The thermal load  also results in faster aging, unreliable connections, and short circuits.

That’s why documenting long cable runs – which typically use cable ducts – is so important. Tracing cables and accessing ducts and rooms that haven’t been touched in years is crucial, especially when it’s a company’s first time documenting. To avoid cable spaghetti, short circuits, and electrical fires, cable runs and cable ducts must be carefully documented and not treated as an IT black box.

The Importance of a Modern Documentation Tool

While it may seem as though these are extreme cases of what could go wrong, the undeniable and unpleasant truth is that without accurate, complete, and up-to-date documentation, problems are inevitable at some point. Dodgy redundancy configurations, Excel tables with incorrect content, and dead cables have often resulted in faults, outages, and significant costs. Delivering reliable services requires data center managers to know where all physical assets and resources are located and how they are connected.

IT information must be properly documented and embedded into workflows for complete transparency across all data center assets. Automated data exchange via interfaces with other systems is also important to ensure the quality and accuracy of the data. In addition to supporting IT assets, an integrated data model should map all software and application information as well as all their dependencies. With complete insight into all areas of your IT infrastructure, knowledge-based and strategic decisions can be made to provide better service and improve customer satisfaction.

Matthias Gromann is the Director of Business Line IT & Data Center Solutions at FNT Software. He has many years of experience as an IT technology expert and is FNT’s topic leader for service-oriented automation in infrastructure management. In his role, he shapes FNT’s solution approaches for enterprise IT, helping companies to achieve greater transparency, more security, and increased productivity in the operation of critical infrastructures.