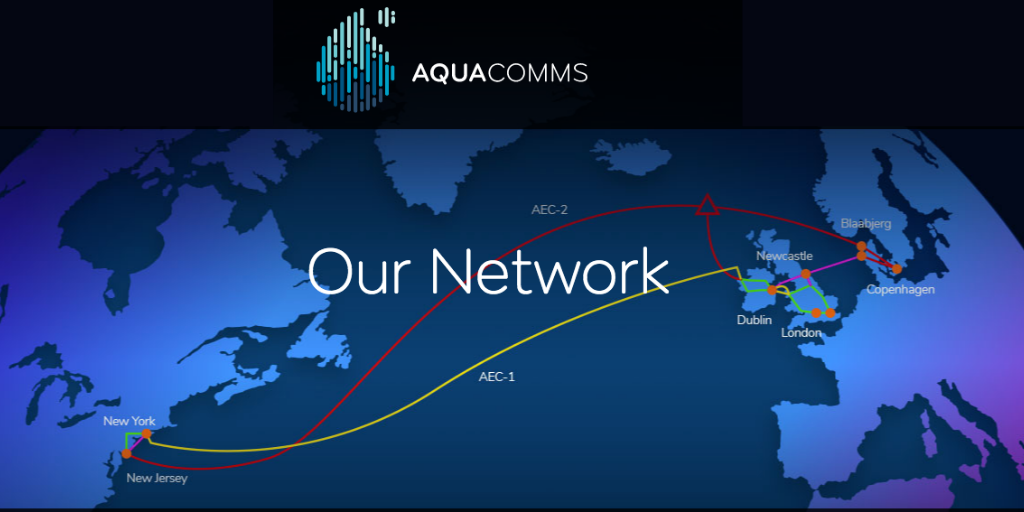 Aqua Comms has a vision of efficient submarine cable infrastructure that provides capacity networking solutions to ISPs, major content providers, and carriers. As the owner-operator of America Europe Connect-1 (AEC-1), America Europe Connect-2 (AEC-2), and CeltixConnect-1 (CC-1), Aqua Comms is building a series of ring-based structures which it calls the North Atlantic Loop.

AEC-1 is designed to be the most secure transatlantic connection between the US and Europe, which lands directly in Ireland with connections to Europe’s data center hubs. AEC-2 uses the Havfrue cable systems designed in partnership with Google, Facebook, and Bulk Infrastructure to deliver high-speed data infrastructure. CC-1 connects Ireland and Wales through the most secure cable crossing the Irish Sea. These high-speed connections have eight times the capacity of the transatlantic cables built in the early 2000s, for the same operating cost. As the legacy cables near the end of their lifespan, Aqua Comms is poised to provide the transatlantic infrastructure of the future.

On April 1, 2021 Aqua Comms announced its acquisition by Digital 9 Infrastructure, a digital investment trust under investment manager Triple Point Investment Management.  The newly established, externally managed trust will invest in digital assets that support a reliable and functioning internet and is in line with the UN Sustainable Business Goal 9: “Build resilient infrastructure, promote inclusive and sustainable industrialization, and foster innovation”. This includes the critical infrastructure the internet requires, such as fiber networks, data centers, towers, and small cells that carry data to the end-user. The portfolio D9 is establishing will include future-proofed, non-legacy, scalable platforms. After the acquisition, Aqua Comms will continue to act as a privately owned company, with the management teams and a majority of the board of directors remaining the same. Aqua Comms will serve as the cornerstone in the newly formed fund. Thor Johnsen, Head of Digital Infrastructure at Triple Point said: “We believe we are at the dawn of a broader transformation. D9 is focused on global investment into the critical infrastructure driving this unstoppable force of change.”

Triple Point Investment Management has existed since 2004, focusing on socially conscious investments that make a difference in areas such as infrastructure, energy efficiency, and social housing. The company has extensive experience in asset and project finance, portfolio management, and structured investments. To date, the company had made $1.8B in investment into infrastructure, creating opportunities for investors and making an impact on public services.

This acquisition will allow Aqua Comms to continue building its vision of efficient infrastructure, deploying it into the widest market through its carrier-neutral approach. Nigel Bayliff, Aqua Comms CEO, said: “It will allow us to accelerate our expansion into new systems and new products in both the Atlantic and new geographies.” Having the backing of a specialty investor will allow Aqua Comms to pursue its ambitions for growth. Together, Aqua Comms and D9 can bring high-speed, transatlantic connectivity to a wider market and advance technology in this space.  To read the press release in its entirety, click here.