Data Virtualization is More Important than Ever Before 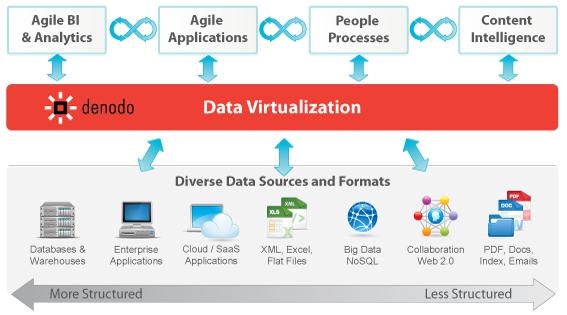 A new whitepaper written by David Loshin and Charles Roe titled The Utilization of Information Architecture at the Enterprise Level: An Analysis of a 2013 DATAVERSITY™ Survey found that most enterprises struggle to evolve beyond tactical and physical data architectures to an enterprise-level information architecture that supports future needs and challenges.  The survey highlights some of the primary challenges ranging from terminology confusion to sparse use of enterprise data models and from lack of future plans to consideration of key new technologies.

The whitepaper revealed that while organizations need to manage the flow of critical data assets throughout the information stream, the ability to do so is not a reality for many.  In fact, less than five percent have documented their data architecture in all systems and more than two thirds employ it at the physical level.

Despite the lack of organization surrounding data architecture, enterprises do understand the importance of data management and that repurposing data can provide even greater business value.  Nearly four out of five (78%) survey participants said facilitating data and application integration was the primary goal of their data architecture followed by facilitating data sharing, and reducing the costs and complexity of interfaces.  While data modeling, data warehousing, naming standards, and database design were the most popular aspects of data management currently being addressed in today’s data architecture, data virtualization topped the list of technologies to adopt as almost three out of five (59%) respondents felt it was important to include going forward.

As data continues to grow and IT infrastructures become more complex, data virtualization is more important than ever before.  Today, organizations utilize data virtualization to enable agile business intelligence and to access new data sources, while those considering implementing data virtualization are doing so to achieve real-time, on-demand access to information, reduce data replication and/or silos, and improve time to market/agility.

According to the report, the benefits of data virtualization include: