The Jersey Shore Meets the Fast and Furious: NJFX Set to Unveil its Data Center Campus 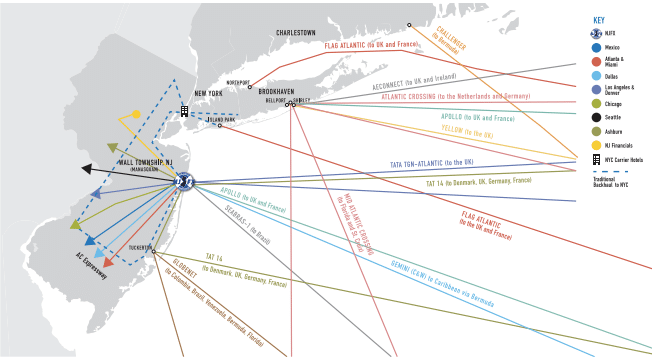 We may be exaggerating, but only just a little. On September 21, 2016 in Wall Township, NJ, the New Jersey Fiber Exchange (NJFX) will be hosting its Phase II Grand Opening extravaganza.

And the furious part? Well, the companies that have invested money and assets in interconnecting their networks within major hub points in cities like New York City and Philadelphia may very well be furious, because now there’s a faster route and a better way.

The NJFX facility is collocated adjacent to the Tata Communications Cable Landing Station where it has been operating the carrier-neutral Meet-Me Room since September 2015. Operational and with a growing number of carriers enabling network interconnectivity from the facility, the NJFX carrier-neutral data center is now set to launch in September 2016.

Stateside, the NJFX Data Center will provide its customers with the ability to reach nearly any major city and thus end-point across the United States. By leveraging a number of network providers, customers can reach a multitude of end-points, including Miami, Atlanta, Dallas, Phoenix, San Diego, Los Angeles, San Francisco, Pittsburgh, Chicago, Seattle, Portland, Denver and nearly any major hub in between.

How do we know this facility will deliver fast connectivity? Customers gain full control over their network routes, thus gaining the opportunity to design a custom network solution that is capable of bypassing key congested hubs such as New York City to get the most direct path.

Standard subsea connectivity options typically rely on backhaul network capacity that transports the data traffic to a data center traditionally located in key buildings such as 60 Hudson Street, 111 Eighth Avenue, 32 Avenue of the Americas, and others. With more networks carrying larger amounts of data for cloud connectivity, live streaming of movies, video games and simply transferring larger files, these buildings and hubs built around them are at risk of running out of space and power — the two key tenets, besides networks, of course, required by companies who rely on data center and colocation facilities. NJFX’s facility, a ‘Tier-III by the Subsea’ data center, solves this problem.

One fun way to learn more about what NJFX has to offer is to attend the launch celebration on September 21, 2016 at its brand-new facility. Joining attendees will be special guests Mario Andretti, (one of only two racing drivers to win races in Formula One, IndyCar, World SportsCar and NASCAR) as well as Ottis Jerome “O.J.” Anderson, (New York Giants legend and Super Bowl MVP).

In addition, attendees will have the opportunity to experience the adrenaline rush of racing at speeds of 220 MPH in a Formula One race car virtual reality experience and, of course, tour the fast and furious data center facility itself.

So when the Jersey Shore meets the Fast and Furious, we mean it. Come on down and join the NJFX team for a fun-filled and exhilarating experience while you learn about this grand, new alternative data center option now available. To learn more about the event, visit njfx.net/rsvp/launch2016.  For more information about NJFX, go to www.njfx.net.  In the meantime, we hope to see you there on September 21!