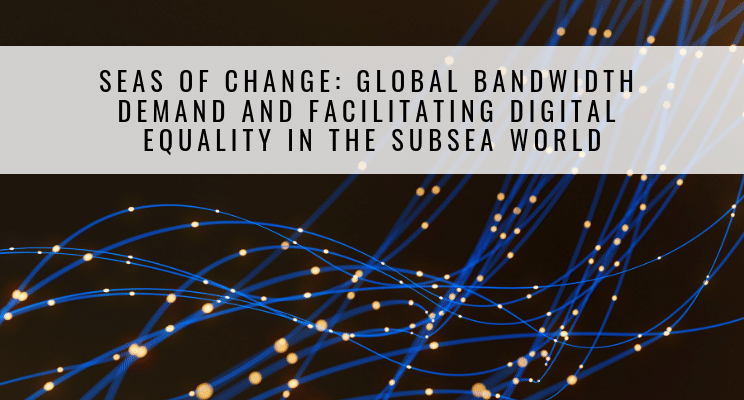 Since the beginning, man has looked to the ocean as a source of growth, sustenance, navigation, inspiration and more. As a critical component of both our own and our planet’s ecosystems, the vast seas that span our world aid us in a number of ways, including producing oxygen, helping with climate regulation, and sustaining our economy. In fact, the U.S. ocean-based economy alone produces $282 billion in goods and services, while ocean-dependent businesses employ around 3 million individuals. As we have grown and developed as a species, the way we harness the opportunities of our seas has also changed.

The subsea cable industry has been using this unique environment provided by our oceans for over 150 years, maximizing the space to create a web of fibres that now form the backbone of global data and content delivery. If the ocean is the heart of our world, subsea cables are our contemporary world’s veins and arteries pumping the lifeblood of technology to the many markets that thrive on it. In fact, subsea cables are now responsible for delivering nearly all transoceanic or international data traffic. However, while the subsea world is a thriving ecosystem, not all markets are being treated equally.

Although global demand for optical fibre is increasing and interconnection bandwidth is projected to grow to 4,991 terabits per second by 2020, when that is split by region the amount of installed capacity varies wildly. While international bandwidth continues to grow in areas like the Caribbean, registering at around 40 percent usage in 2018, growth rates in the area are falling to around 20 percent. Regions like the Caribbean are simply getting left behind. In the same area, fixed broadband subscriber rates, sometimes reaching up to a 60 percent growth rate from 2017 to 2018, are simply outpacing penetration. Bandwidth demands are burgeoning, but the average subscriber in the Caribbean only saw around a 30 percent bandwidth increase from 2014 to 2018.

In a world that is so dependent upon interconnection as a source of information and opportunity, this fibre infrastructure is an essential key for unlocking the economic benefits of the internet. Interconnection is inextricably tied to the economy through education, employment, services and entertainment, meaning that those who do not have readily available access can be notably disenfranchised. Regions like Latin America, Africa, and the Caribbean are all areas in which bandwidth demand is increasing, but the ability and infrastructure to support those demands is not yet developed creating a growing digital divide.

Over-the-Top providers (OTTs), with the amount of throughput they demand, are in some part facilitating globalisation and providing opportunities for convergence between regional and transoceanic markets with their own builds. With OTTs in the mix, the subsea industry is pushing for more bandwidth and fast. If entities like Google, Facebook, Netflix or Amazon can’t get the capacity where they need it, they push the industry forward by creating their own pipes, but the issue of inequality still persists. In the Caribbean, cable investment has been particularly limited. From 2016 to 2018 only two new systems were implemented, while in the years to come only three more systems are planned.  As the world is going farther and faster with amped up demands on subsea cable systems, the underserved markets without the necessary infrastructure are shrinking further out of sight from the rest of the pack and becoming damaging bottlenecks.

This is exactly the issue that Deep Blue Cable is battling as the developer of a state-of-the-art subsea fibre-optic system aimed at providing connectivity across the Caribbean islands and to the Americas. As the company’s CEO, Steve Scott, observed during a panel at the Subsea Americas event in Fort Lauderdale, “It’ll be quite some time for the OTTs to take an interest in the Caribbean. They backhaul to the US so there’s no real incentive there.” To combat inadequacies leading to lack of interest, Deep Blue Cable has designed a subsea cable system to interconnect the region in order to bolster connectivity, promising to create digital equality for the Caribbean and foster global equalization of technological opportunities. The system, once completed, will provide a total capacity of 160,000 Gbps and will have landing points reaching from Naples, FL to Paramaribo in Suriname.

As an emerging market, the Caribbean’s demand for data is high and capacity is stretched to its limits. The potential is huge with a 10-year growth trajectory forecast to reach 50 times existing capacity, but it simply needs pan-regional bandwidth to compete. Plus, much of the available existing infrastructure has experienced signal degradation as a result of being past its planned technical lifespan. Spanning 12,000 kilometers and with more than 40 planned landing sites, Deep Blue Cable’s top-tier cable system is designed to fulfill the need for advanced telecom services. The company’s vision also effectively brings these island nations not only closer to each other, but to the rest of the world as well.

Due to its relative scarcity, Caribbean bandwidth is among the most expensive in the world. To compound this the Caribbean is operating in a world where the top mobile providers can effectively control the market by consuming up to 70% of market share. Towards the end of 2018, monthly lease prices for international bandwidth were at times seen to go upwards of $20,000. Fortunately, on top of building out critical infrastructure, Deep Blue Cable is working to ensure competitive pricing and bolstered resilience through an alternative supply route. Even further, Deep Blue’s system is designed to alleviate the pressure of the restricting agreements that lock many island companies into consortium models that highly favour the provider. As a result, Deep Blue Cable is working to improve connectivity to international and regional telecommunications operators, regional network providers, OTT providers, data centers, government, and large enterprises, effectively enabling healthy business competition and growth. The company’s system, as it continues to develop, will provide significantly higher capacity, lower unit costs, lower latency through direct connectivity and better reliability through improved route planning and installation techniques.

Overall, there is much ground to cover before we can say everyone across our world has equal access to critical internet applications, but the tides are changing. Looking forwards, as globalisation permeates more emerging markets, more people and businesses can expect better connectivity, higher capacity and a more equal digital experience through subsea cable.