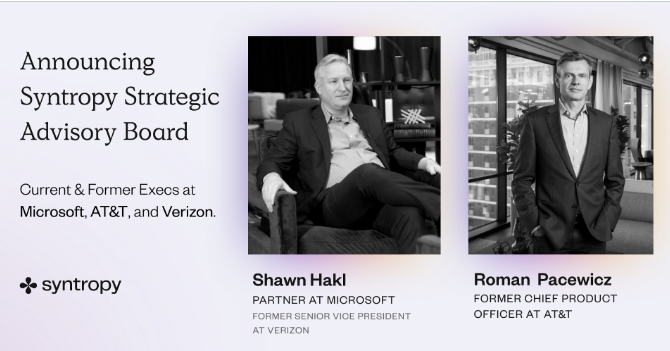 As it was built, the Internet was designed to provide best-effort communications between a limited number of hosts. However, its exponential rise in popularity has created inefficiencies in safety and performance but has served as a great foundation for international commerce and the other many uses of the Internet. These inefficiencies have led to the development of overlay networks that provide a better performance, and while they have grown in popularity, they remain expensive.

Syntropy is changing this through a “user-centric Internet” characterized by a decentralized overlay network that is encrypted, performance-optimized, and accessible to developers.

While Syntropy was founded by the co-founder of  Equinix and JP Morgan alums and has formed relationships with tech giants such as Cisco, the company’s latest advisors will continue to help scale the next generation of the Internet.

Syntropy welcomes Shawn Hakl, Microsoft Azure Networking patents and former SVP at Verizon, and Roman Pacewicz, Chief Product Officer of AT&T, to their board of advisors. This unlikely pair from rival telecom companies demonstrates that innovative solutions can break down corporate boundaries and instill excitement about the future in even seasoned industry executives. Their advisory will be vital in helping Syntropy to drive strategy and build connections with other companies.

Central to Syntropy’s business goals is Shawn Hakl’s deep experience within the technology and telecom industries. Currently, he is a partner at Microsoft where he oversees the development of the Azure Edge Platform. Previously, Hakl worked for Verizon for almost two decades, where he concluded his tenure as Senior Vice President. In this role, he directed the development of new products and business lines, such as Verizon’s white box strategy, SD-WAN service, MPLS service, and closed-loop automation roadmap.

Roman Pacewicz currently serves as the Chief Products Officer for AT&T, leading product management and development for AT&T Business. Services offered include fixed and wireless internet services, which brought in a revenue of $37 billion in 2018. Previously in his career, Pacewicz had key leadership roles, where he drove innovation and performance improvements across many different disciplines.

The combined expertise of Hakl and Pacewicz will be essential as Syntropy launches their product ecosystem to the verticals they understand intricately. The two telecom executives are excited about the work Syntropy is doing. For Pacewicz, he says: “It solves critical problems regarding security and performance that businesses face every day, not to mention makes it much easier to enable next-gen technologies like multi-cloud, edge, IoT, and 5G. I’ve long thought that this is where the world is headed, and Syntropy is executing on that vision.” Hakl added, “Syntropy has developed a transformative technology with the potential to fundamentally change the way data moves across the internet, and few teams have the skill and imagination to think this big.”

Syntropy aims to be an overlay for the entire Internet, delivering performance optimization and encryption to all users. To achieve superior performance, the company uses a network of globally distributed delay routers, acting as waypoints for Internet traffic. These routers continually test possible paths from themselves across the entire network. With this testing, Syntropy can route traffic in a way that delivers the best end-to-end experience.

This technology is building upon the foundation of the Internet. While overlays have been built over the Internet for years, Syntropy is making it so that overlays are excessive and benefit everyone.