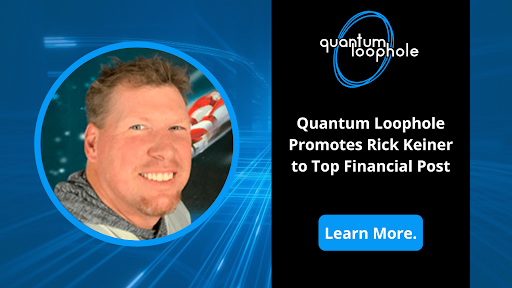 At Quantum Loophole, Rick continues to play a leading role in enabling the company to proceed with its plans to develop the largest master-planned data center project in the region.

He played a leading role on the team that negotiated the financing of the Quantum Frederick development of over 2,100 acres in Frederick County, has strengthened the sales pipeline through his relationships in the industry, and is orchestrating the financing of QLoop, Quantum Loophole’s next regional fiber-optic network connecting Quantum Frederick to data center alley in Northern Virginia, which has drawn active interest from carriers and data center companies, alike.

“Rick is absolutely the one we need at the Finance helm for Quantum Loophole,” remarked Josh Snowhorn, founder and CEO. “We have worked closely together on past major initiatives, and Rick’s insight, diligence and attention to detail was instrumental in making the vision a successful reality. He is a key member of our team overseeing our funding, investment trajectories, and transactions in the pipeline. ”

Rick brings two decades of extensive experience in high growth environments improving processes, reporting and profitability to the Quantum Loophole team. Before joining Quantum Loophole, Rick led the F P & A group at CyrusOne, and played pivotal roles in finance, SEC reporting and investor relations at regional telecom provider Cincinnati Bell. Rick was an integral part of the team responsible for spinning off the CyrusOne (Nasdaq: CONE) IPO in 2013.