The second-largest city in France, Marseilles has always played a significant role in international commerce. Since 600 B.C., Marseille has served as a major trading hub, connecting Europe to the finest goods and exports from the Middle East, Africa and Asia. It still maintains a similar role as the nation’s largest port for physical trade while quickly becoming a hub that generates one of the most sought-after commodities in the digital age: content and consumers. With undersea connections stretching from Marseille to these emerging areas, this bustling city finds itself uniquely positioned as both a transit point and content creation destination.

Here are some reasons why U.S. and international enterprises looking to expand their footprints into the EU are flocking to Marseille.

Beginning with the Cold War era and escalating all the way into the late 1990s, private enterprises, telecom providers and eventually venture capitalist firms joined forces to begin laying submarine cable between the U.S. and strategic locations across continental Europe that included easily accessible coastal cities such as Dublin, Amsterdam and Marseille. These continent-connecting lines were underutilized for the time, yet the rise of streaming audio and video content and the growing popularity of these platforms have increased traffic exponentially, quickly taxing older pipelines.

With the price of investment decreasing, and the capacity inversely increasing during the last decade, new fiber optic cables have been deployed by private enterprises, cloud, and telecom providers that offer much greater bandwidth and lower latency. Not only have these multi-terabit cables made it possible to deliver greater performance for companies across intercontinental Europe, they have also proved to access geographies that are impassable by traditional fiber optic cables, for example, mountainous regions in the Mediterranean such as Italy, and desert regions across the Middle East and much of Africa).

While some describe it as a “chicken and egg” scenario, there is no denying that the availability of higher capacity and lower latency has empowered Content Delivery Networks (CDNs), cloud providers, financial institutions and digital gaming enterprises to feed the ever-growing demand for content and services across the EU.

In fact, France, Germany and the UK have all seen a significant increase in video streaming data usage, with both France and Germany nearly doubling their usage in the past year. The close distance of Marseille to these hubs and other foreign markets has made it possible for both regional broadcasters such as BSkyB and international providers like Netflix to reach customers across the EU.

In financial services, both time to market and latency are critical when seeking to execute complex, potentially lucrative algorithmic trading strategies. While Frankfurt, Zurich and London will continue to maintain prominent positions given their proximity to other financial exchanges, Marseille’s multi-terabit cable systems mean firms can achieve speeds of 125 milliseconds roundtrip between Marseille and Singapore.

U.S. and international businesses keep looking for new markets in which to expand to gain competitive advantage. As illustrated earlier, continental Europe continues to offer opportunities for growth but does not offer the same opportunities to become a “first mover” such as Africa and the Middle East.

Africa is home to over 1.2bn people and accounts for less than 10 percent of the world’s Internet traffic. It currently stands as the fastest-growing region for Internet bandwidth growth — over 135 percent in 2015 alone. Most of this growth comes from cities that have established connectivity, including Egypt, Kenya and Nigeria. These three countries account to almost 47 percent of all traffic across the continent, leaving most of the continent still largely unconnected.

The Middle East is likewise underserved, accounting for approximately four percent of the world’s online traffic.  As noted earlier, geographic limitations to providing broadband in the region has made it difficult for providers to penetrate by traditional means, making access to SEA-ME-WE5 and other undersea infrastructure crucial to tapping into some 250 million potential new customers. 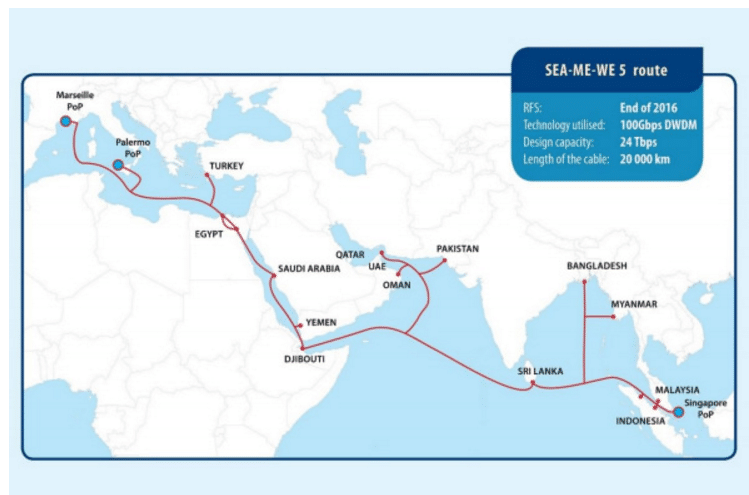 Figure 1: The SEA-ME-WE5 undersea cable system extends from Marseille to several developing nations including part of Northern Africa and the Middle East before terminating in Singapore.

With close to 40 percent of international internet connectivity to Africa coming from peering points in France, it is easy to comprehend why Marseille is gaining in popularity. The speed, pricing, and location advantages unique to the city have placed it in the same conversation as more historically prominent European hub cities such as Frankfurt, London, Amsterdam and Paris, otherwise known as FLAP. In recent years, some cloud providers elect to peer their networks primarily through Marseille, bypassing Paris entirely. The coming deadline for compliance with the Global Data Protection Regulation (GDPR) means more companies will consider Marseille as both a data hub and content creation point, in part because it fulfills many of the regulations’ data sovereignty stipulations.

With so many advantages to establishing a pivotal presence in Marseille, the question remains: How much longer will this hidden gateway to the developing world remain a mystery?

Fabrice became Managing Director of Interxion France when the subsidiary opened in October 1999, and since 2011 has been President of Interxion France SAS. He began his career in 1987 at Anatel as Director of Marketing and Sales. Then he joined Sagem in 1988 where he was Sales Manager for Africa, and Export Manager for Europe and Asia, before being appointed head of the UK subsidiary which he launched in 1996. Fabrice holds a Master’s degree in Business Law and Tax Law, and graduated from Ecole Supérieure Libre des Sciences Commerciales Appliquées.