Across the world, Hong Kong is known for its vibrant culture, fast-paced urban feel and towering skyline. As part of the second largest economy in the world, this metropolitan mecca in China is no stranger to being at the forefront of the global stage, especially when it comes to the data centre industry. In 2018, the Hong Kong data centre colocation market was worth $883m and is projected to continue on its steady upward trajectory to reach $1.7b by 2023. Serving as both a critical network hub for mainland Chinese businesses to expand internationally and a gateway to mainland China for international players, Hong Kong’s market is a crucial piece of the larger market fabric and a magnet for hyperscale cloud platforms. To catalogue the state of the data centre colocation, hyperscale cloud and interconnection market in Hong Kong, Structure Research produced a thorough report synthesizing the industry conditions from the perspective of revenue generation, space and power. 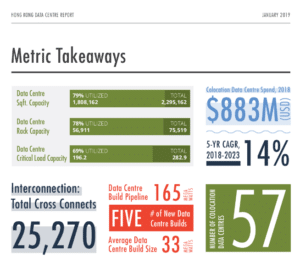 Hyperscale refers to data centres with at least 5,000 servers that span more than 10,000 square feet in size. On a global scale, China is currently second to only the U.S. in terms of hyperscale data center operations. Hong Kong’s hyperscale market also has the unique advantage of being the only market in Asia Pacific where hyperscale cloud providers such as AWS, Microsoft, Google and Alibaba are fully leasing their capacity requirements from colocation providers instead of building their own. This particular subset of hyperscalers is a key driver of absorption of new data centre supply. Due to its growing demand for wholesale colocation, the Hong Kong market will likely split between retail, mainly utilized by smaller businesses, and wholesale earlier than previously expected. As it stands, Structure Research notes that the hyperscale cloud providers account for over 30 percent of sold data centre capacity in the Hong Kong market, a figure that is expected to rise as the market moves forward and cloud adoption accelerates in the region.

This trend towards larger, more campus-style infrastructure builds in an effort to meet the needs of hyperscalers and the hyperscale cloud shows no signs of slowing, especially as Structure Research projects the Hong Kong colocation market’s expansion with a 14 percent compound annual growth rate. This brings into perspective another key driver for the market: land scarcity.

Hong Kong is a small, densely-packed city-state with notably limited land for both greenfield and brownfield builds. With a demand profile heavily skewed towards the hyperscale end, this limitation becomes exacerbated. As is natural in any economy, when supply is low, prices are on the rise. As a result, the Structure Research report notes that the Hong Kong market landscape has become a highly competitive sphere in which only a few large and powerful players can successfully vie for the necessary land and power upon which to implement data centre infrastructure. For example, NTT Communications, SUNeVision (iAdvantage) and Equinix currently round out the list as the top three data centre providers in the region out of a total of 44, and together they generate 55 percent of revenue. Their market dominance reinforces the idea that retail colocation will likely be outpaced by wholesale, though retail colocation still remains on an upswing. 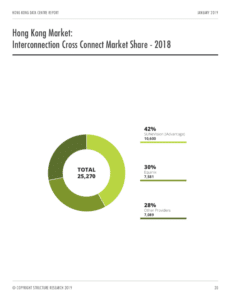 Meanwhile, this issue of space has brought a new participant into Hong Kong’s data centre market: land and real estate developers. These developers are increasingly becoming prominent players in the infrastructure and real estate that supports the Internet economy.

Hong Kong’s recent explosive growth from sources such as hyperscale cloud infrastructure have made waves throughout the region. Now, the competition is more intense, the land is even more valuable and projections for the future remain strong as the needs for colocation build.