HTML5 will certainly have an impact on web applications, but not nearly as much as hoped on the mobile application market. 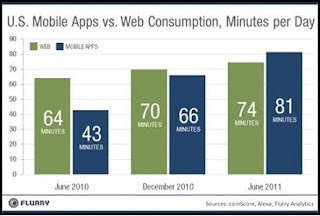 There’s a war on the horizon. But despite appearances, it’s a war for interactive web application dominance, and not one that’s likely to impact very heavily the war between mobile and web applications.

on mobile devices indicating substantially impressive growth over the next five years.
“More than 2.1 billion mobile devices will have HTML5 browsers by 2016, up from just 109 million in 2010, according to a new report by ABI Research.” — The HTML Boom is Coming. Fast. (June 22, 2011)

Impressive, no? But browser support does not mean use, and a report issued the day before by yet another analytics firm indicates that HTML5 usage on mobile applications is actually decreasing.

“Mobile applications are commanding more attention on smartphones than the web, highlighting the need for strong app stores on handset platforms. For the first time since Flurry, a mobile analytics firm, has been reporting engagement time of apps and web on smartphones, software is used on average for 81 minutes per day vs 74 minutes of web use.: — Sorry HTML 5, mobile apps are used more than the web (June 21, 2011)

What folks seem to be missing – probably because they lack a background in development – is that the war is not really between HTML5 and mobile applications. The two models are very different – from the way in which they are developed and deployed to the way they are monetized. On the one hand you have HTML5 which, like its HTMLx predecessors, can easily be developed in just about any text editor and deployed on any web server known to man. On the other hand you have operating system and often device-specific development platforms that can only be written in certain languages and deployed on specific, targeted platforms. There’s also a marked difference in the user interface paradigm, with mobile device development heavily leaning toward touch and gesture-based interfaces and all that entails. It might appear shallow on the surface, but from a design perspective there’s a different mindset in the interaction when relying on gestures as opposed to mouse clicks. Consider those gestures that require more than one finger – enlarging or shrinking an image, for example. That’s simply not possible with one mouse – and becomes difficult to replicate in a non gesture-based interface. Similarly there are often very few “key” commands on mobile device applications and games. Accessibility? Not right now, apparently.

That’s to say nothing of the differences in the development frameworks; the ones that require specific environments and languages.

The advantages of HTML5 is that it’s cross-platform, cross-environment, and highly portable. The disadvantage is that you have little or no access to and control over system-level, well, anything. If you want to write an SSL VPN client, for example, you’re going to have to muck around in the network stack. That’s possible in a mobile device development environment and understandably impossible in a web-only world. Applications that are impossible to realistically replicate in a web application world– think graphic-intense games and simulation systems – are possible in a mobile environment.

MOBILE BROADENING ITS USE

The one area in which HTML5 may finally gain some legs and make a race out of applications with mobile apps is in its ability to finally leverage offline storage. The assumption for web applications has been, in the past, always on. Mobile devices have connectivity issues, attenuation and loss of signal interrupts connection-oriented applications and games. And let’s not forget the increasing pressure of data transfer caps on wireless networks (T-Mobile data transfer cap angers smartphone users, Jan 2011; O2 signals the end of unlimited data tariffs for iPhone customers, June 2010) that are also hitting broadband customers, much to their chagrin. But that’s exactly where mobile applications have an advantage over HTML5 and web applications, and why HTML5 with its offline storage capabilities comes in handy.

But that would require rework on the part of application developers to adapt existing applications to fit the new model. Cookies and frequent database updates via AJAX/JSON is not a reliable solution on a sometimes-on device. And if you’re going to rework an application, why not target the platform specifically? Deployment and installation has reached the point of being as simple as opening a web page – maybe more so given the diversity of browsers and add-on security that can effectively prevent a web application requiring scripting or local storage access from executing at all. Better tracking of application reach is also possible with mobile platforms – including, as we’ve seen from the Flurry data, how much time is spent in the application itself.

If you were thinking that mobile is a small segment of the population, think again. Tablets – definitely falling into the mobile device category based on their development model and portability – may be the straw that breaks the laptop’s back.

“Our exclusive first look at its latest report on how consumers buy and use tablets reveals an increasing acceptance–even reliance–on tablets for work purposes. Of the 1,000 tablet users surveyed, 57 percent said they are using tablets to replace laptop functions. Compared with a year ago, tablet owners are much less likely to buy a new laptop or Netbook, as well.
Tablets are also cutting into e-reader purchase plans to an ever greater degree.
What’s more surprising, given the newness of the tablet market, is that 46 percent of consumers who already have a tablet are planning to buy another one. ” — Report: Multi-tablet households growing fast (June 2011)

This is an important statistic, as it may – combined with other statistics respecting the downloads of applications from various application stores and markets – indicate a growing irrelevance for web-based applications and, subsequently, HTML5. Mobile applications, not HTML5, are the new hotness. The losers to HTML5 will likely be Flash and video-based technologies, both of which can be replaced using HTML5 mechanisms that come without the headaches of plug-ins that may conflict, require upgrades and often are subject to targeted attacks by miscreants.
I argued earlier this year that the increasing focus on mobile platforms and coming-of-age of HTML5 would lead to a client-database model of application development. Recent studies and data indicate that’s likely exactly where we’re headed – toward a client-database model that leverages the same database-as-a-service via a RESTful API and merely mixes up the presentation and application logic tiers on the client – whether through mobile device development kits or HTML5.

As mobile devices – tablets, smartphones and whatever might come next – continue to take more and more mindshare from both the consumer and enterprise markets we’ll see more and more mobile-specific support for applications. You’ll note popular enterprise applications aren’t simply being updated to leverage HTML5 even though there is plenty of uptake in the market of the nascent specification. Users want native mobile platform applications – and they’re getting them.