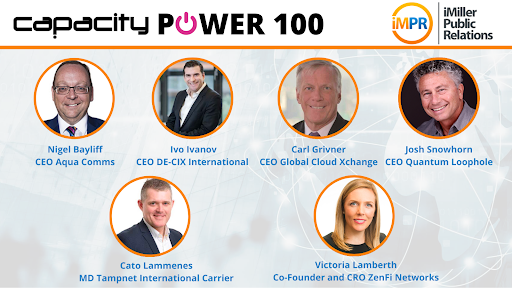 Just recently, Capacity Media released its fourth edition of the Capacity Power 100. The global index lists 100 of the most influential people in the wholesale carrier and ICT communities. Those named are powerful people in their respective fields, and innovators, disruptors, critical thinkers and agents of change – who push the conversation forward in varied and vital ways. The full list includes carriers, vendors, service providers, data center operators, hyperscalers, mobile and messaging players, internet exchanges, towercos and those in satellite, subsea, networking, wireless, software and investments.

iMiller Public Relations is proud to work closely with six of this year’s honorees on the Capacity Power 100! These industry leaders are major influencers in the global digital infrastructure industry. They are not only disruptors, they are also paving the way for young professionals to shape their careers in the digital infrastructure space. Learn more about these six industry leaders:

An industry subsea cable veteran, Bayliff oversaw the delivery of Aqua Comms’ CeltixConnect-2 and North Sea Connect subsea systems, as part of its ownership in the Havhingsten cable co-owned with Bulk Fiber Networks and Meta. Boasting a number of technological firsts in its design and construction, Havhingsten is the world’s first aluminum conductor powered subsea cable system.

In 2022 alone, DE-CIX reached a number of milestones under Ivanov’s guidance. In March the company unveiled its fifth internet exchange with the launch of DE-CIX Phoenix, which is directly interconnected to DE-CIX Dallas. During Capacity Middle East 2022, Ivanov signed a strategic partnership with Iraq-IXP to develop an interconnection internet exchange platform in Iraq.

Grivner was CEO of Colt Technology Services until his appointment to lead Global Cloud Xchange (GCX) in July 2020. At the top of his agenda there is GCX’s imminent acquisition by UK investor 3i Infrastructure for $512 million. Grivner had taken over a company in Chapter 11 bankruptcy protection, owned by its lenders, who replaced Reliance Communications of India. Before Colt, Grivner spent three years in Singapore as CEO at Pacnet.

Snowhorn has big ambitions in the data center market. The former Terremark and CyrusOne executive founded his company Quantum Loophole with the aim of constructing a mass-scale data center campus in Maryland. The project sets out to bring true innovation and change to the data center industry as it looks to the future.

A pioneer of the carrier-grade enterprise, Lammenes has taken Tampnet into new territories and services. He developed and has since led the carrier business unit by leveraging Tampnet’s assets in the North Sea. The network was originally deployed to connect energy facilities, and Lammenes has extended and re-purposed it to become one of the main arteries in and out of the Nordics.

Building on her experience of deploying, managing and selling digital infrastructure in New York, Lamberth co-founded ZenFi Networks in 2013. Instrumental in the LinkNYC project, last year ZenFi co-designed Link5G, adding a multi-tenant, multi-technology siting solution as a toolkit for carriers in New York City. She is a board member at the Center for Hearing and Communication and is an advocate for children with hearing loss.