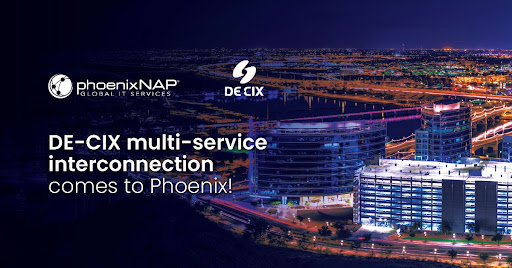 Phoenix, Arizona, the fifth largest city in the United States, is one of the fastest growing U.S. commerce hubs. Quickly becoming the new urban technology center of the West coast, Phoenix is experiencing accelerated demand for interconnectivity services. One of the flagship data centers in Phoenix is owned and operated by PhoenixNAP, a global IT service provider that offers an array of digital infrastructure and cloud enablement services.

DE-CIX, the world’s leading carrier and data center neutral Internet Exchange operator, announced it will add PhoenixNAP’s data center as a strategic Point of Presence (PoP). This deployment will make PhoenixNAP become a core hub for DE-CIX Phoenix and an extension point to DE-CIX’s global ecosystem. By becoming a local PoP in Phoenix, DE-CIX will be able to provide low cost and low latency connectivity options closer to businesses throughout the Southeast United States.

“We are delighted to launch DE-CIX Phoenix in PhoenixNAP’s excellent facilities,” Ivo A. Ivanov, CEO of DE-CIX International. “Our Phoenix expansion increases our relevance in the North American market, and is now our fifth location following the success of our IXs in Chicago, Dallas, New York and Richmond.” DE-CIX’s service will bring data and interconnection closer to users, as DE-CIX’s locations are now spanning from East to West across the United States. DE-CIX will continue to strengthen its position as the largest carrier and data center neutral interconnection ecosystem in the world.